Posted on July 19, 2017 by crimemysteryfestival 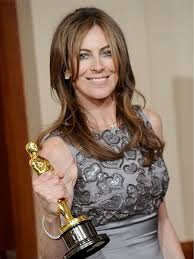 Bigelow’s first film was the low-budget debut THE LOVELESS (an arty, hipster spin on ’50s biker movies, co-directed with Monty Montgomery and starring Willem Dafoe)  Following that, she  made her critical (but commercial unsuccessful) breakthrough with NEAR DARK, a grimy yet wickedly stylish tale of a pack of vampires traversing the American Southwest.  This was followed by a slew of films including POINT BREAK, STRANGE DAYS and others culminating with her glorious Oscar winner THE HURT LOCKER.  The retrospective arrives in time with the release of her new film DETROIT.

Bigelow was married to and divorced from director James Cameron.  Their collaboration can be seen in his script of STRANGE DAYS which Bigelow directed.

Bigelow’s best films are NEAR DARK, BLUE STEEL and STRANGE DAYS, all three of…